The genus coprinopsis indicates a mushroom that appears similar to those within the coprinus genus, which in Latin means ‘living on dung’. Whilst this is befitting for some mushrooms, it is not suited to this particular species, which I found amongst the leaf litter on a walk in the woods last November.

Fortunately, the location in which I found the mushroom – a damp shady spot by a stream in a deciduous forest – was only a few minutes walk away from home. Having discovered it at an early stage in its life cycle, I decided to return and document its growth. 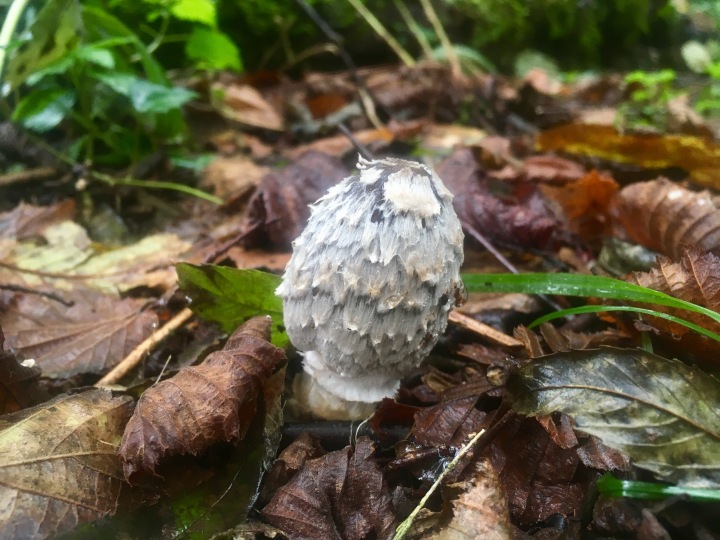 At first, it was only about 5cm high, a small, egg shaped bulb poking out of the fallen leaves, completely covered in silvery-white fibrils, which are like small fluffy scales. This flocculent appearance led me to think, after some attempt to identify the mushroom, that it was the Shaggy Inkcap, Coprinopsis Comatus, also known as the Lawyer’s Wig, or Shaggy Mane mushroom, which begins its life covered in these fluffy white scales.

There were 27 hours between my first visit and the second, and on the second observation I could see more of the dark brown surface of the cap between the white scales, revealing a striking contrast. I went home and tried again to identify exactly what mushroom it was. I found that the Shaggy Inkcap spends a greater amount of its growth cycle covered in the white scales, and continues growing into more of an elongated cylinder before revealing the similarly dark skin beneath its white scales. I discovered that it wasn’t the Shaggy Inkcap, but the Magpie Inkcap, Coprinopsis Picacea.

Picacea comes from the scientific name of the Eurasian Magpie, Pica Pica. Although the flash of the black and white feathers and clattering call of the magpie is an increasingly common sight and sound, the Magpie Inkcap is a relatively rare mushroom, so I was grateful to have found one, especially so close to where I live.

The Shaggy Inkcap is a mushroom prized for its delicious, apparently somewhat salty flavour; the Magpie Inkcap, however, is poisonous. Thankfully, this wasn’t a realisation that was made from experience, and I continued to revisit the mushroom and see how it was growing. 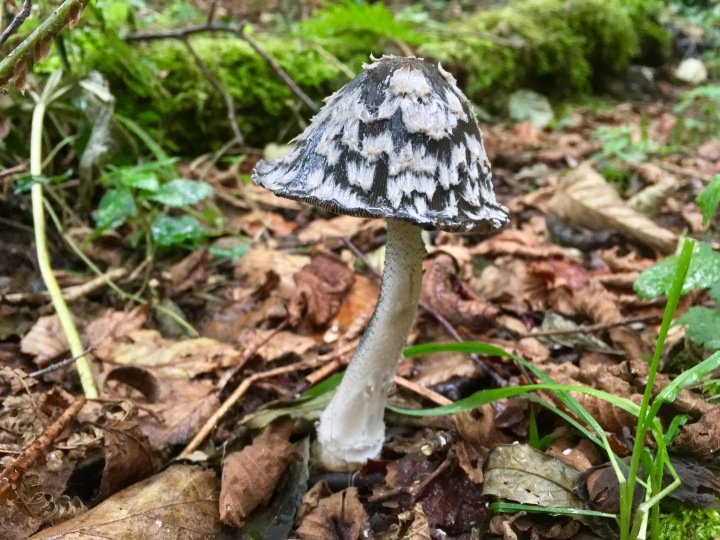 Between the second and third observation there was 26 hours, in which time the mushroom had more than doubled in height, from about 7 to 15 cm! In this time the cap had opened from an egg to a bell shape, showering down black spores from its gills, some of which were visible on the white stem.

The edge of the cap had also began to curl upwards and begin its process of deliquescing, whereby the cap effectively melts away, dissolving into an inky black liquid which aids spore dispersal in wet weather. This liquid can in fact be gathered and used as actual writing ink!

I returned to the Magpie Inkcap the following morning, 17 hours later, by which point the cap had nearly completely deliquesced, and turned from bell-shaped to flat/concave. The stem appeared to have been nibbled at slightly. I wondered if the mushroom was similarly poisonous to the offending insect or small rodent.

Magpies, of the avian variety, apparently mate for life, and so, as the rhyme goes, seeing only one is supposed to signify sorrow. Observing this fungal Magpie grow, however, was certainly a joyous experience.