It’s interesting how the word ‘social’ can be used in both fun and absolute opposite contexts. To socialise, for example, can bring so much joy. But to go to the social security office, for instance, can bring pain and disappointment.

Coincidentally, and for the best, this summer has brought both types of social.

Boringly, the social security part was a factor in trying to sort out many a bureaucratic ‘need’. With Brexit and other rules, it is now necessary for foreigners like me to exchange the driving license for a Spanish one. Trying to be organised, I booked an appointment at the central traffic office in Oviedo, and got stopped on the way home by the guardia civil. The representative in question said that he could charge me on the spot for not having the correct license, but as I had the proof of appointment the next day he let me off.

Next day, I go again to the office and try to get the new license. I don’t yet have an official resident permit so I can’t actually change it, so need to go back and do that. It’s easier said than done, but it has felt a lot like running around in circles trying to get this piece of paper to lead us to that piece of paper which will allow us to get certain card. We should have sorted this out ages ago, but it was hard then and unfortunately still is.

Fortunately, a very nice person who works in the town hall helped us with some of the confusing stages of the online system, so now we’re a step closer.

Moving on to the more interesting social stuff,  we’ve had a fair amount of visitors these past few months.

Our firsts were Irene & Theresa, from Austria. We met Irene at April’s Extinction Rebellion protest in Madrid, she has just finished her Erasmus in Granada, and decided to take a road trip around Spain before heading home. About an hour before arrival, she gave us a call: “I’m about an hour from your house, are you guys free?”

We fired up the oven and made spelt pizzas with purple braised cabbage, cheese from our guests and red wine. Then we had a walk in the dark and talked reflective thoughts about Extinction Rebellion.

In the morning they brought treats from the car, including an apricot jam made by Theresa’s mother and some melting hot chocolate sticks. We ate pancakes for breakfast then they went on their way to do some boating near the coast.

A few days later, Nik went to Avila to do another ten day silent meditation course (Vipassana). I held the fort and had a ridiculously good time. Any fears of potential loneliness were swept away by the arrival of a group of friendly English archaeologists doing some digging on a local field.

Our village, Villanueva, used to be called San Romano. Then about four hundred years ago there was an avalanche which crushed everything, suffocating the remains of the village with a thick layer of earth. On this layer, a new village was built, hence Villanueva.

The archeologists had a digger take out about 4 feet of earth to expose the layers of the previous village, the avalanche and the new earth. They then scraped and dug to find new artefacts which could help flesh out the story of what came before.

The group were very inclusive and invited people from the village to come and have a look. On one of the last days they also had the children build a mini version of the old village from rocks and sticks, so that they could then pour a huge barrel of dirt over it in replica of the avalanche. 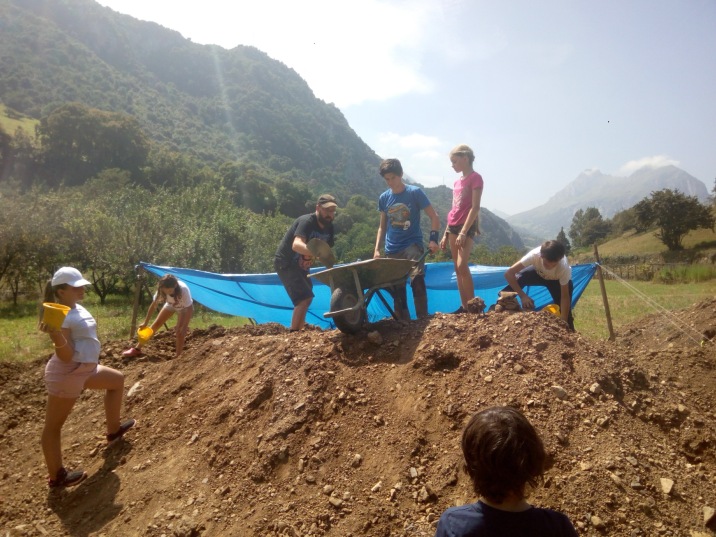 On one of the days I volunteered to take two of the group on what I thought was a round route, past some old stone cabins on a forgotten camino up the mountain. They had an espicha (banquet) planned down in the village at two, so we said to meet at 11. We took many pauses to breathe, eat biscuits, look at the ruins and find medieval pottery in small caves.

When arriving to the top, I was surprised to find there was no obvious path to go back down the mountain via the other side. Chris and Gabe were very trusting, and adventurously chopped down many brambles with an old stick in effort to find the ‘path’ I had promised. Time went by, legs got cut, and we reached a dark, muddy point in the middle of the forest. I had to admit, “I don’t have a clue where we are.”

We heard bagpipes coming from the pueblo, the espicha was soon. We could look for the alleged path, or go back the way we came. I knew the path existed because I had been on it once before, around a year ago, after climbing to the very top of the mountain and struggling through spikes to eventually find a cobbley stone path.

I didn’t want to be responsible for more lost-ness, or them missing the banquet, so we turned back. They missed the banquet anyway. They didn’t mind. Later we met again and drank a lot of beer and sang at the local bar. All was well.

About a week later, Henry came to visit and we attempted the route again but this time the opposite way round: surely we would find the connecting path! I quickly renounced authority and let Henry lead the way through the trees and slippy mud, where somehow we eventually came to a field guarded by barbed wire which is near to where I’d stopped with Chris and Gabe. We managed the round route!

Our last visitor, Torben,  surprised us by announcing he was floating around Galicia and planned to walk to our house from Oviedo. We met Torben on our first ever workaway at Andreas’ near Novellana. Two years ago we were talking about wanting to create our own permaculture garden and land-based lifestyle, which is where Torbs found us two years later. A timely and motivating reminder of how far we’ve come. 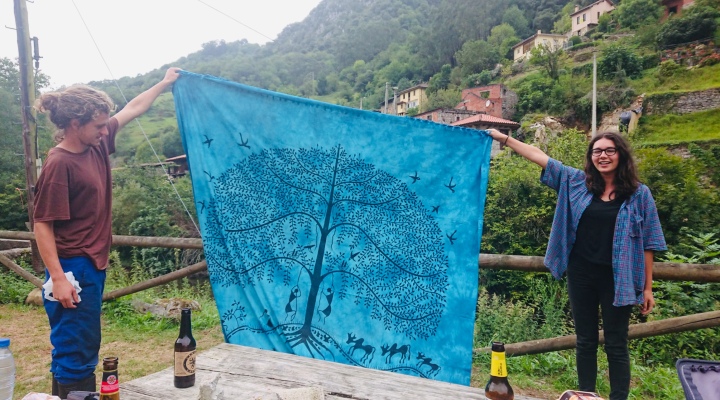 Torben bought us a beautiful tapestry, and regaled us with stories of his two year permaculture course in Cork, Ireland. We ate a feast of roast potatoes, beetroot quiche and sautéed beans, alongside sidra. Our conversations left us feeling inspired and happy. Torben woke up early and bounced off to do some of the Camino Primitivo. 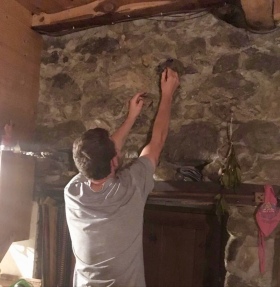