How dare I even file this post under ‘permaculture’, you think. I know, I know. It looks bad. Especially after all we have harped on about no-dig.

But let’s back up a little bit. Charles Dowding himself, and other reputable no diggers, have also been known to state that, under certain circumstances, digging before starting organic beds can be appropriate.

Well, it’s true. Digging does do that, which is why we didn’t do any digging on our rented land for the whole of the last year that we have had it. We covered up 50m”2 with a sheet of black plastic and left if for four months to kill the grass and weed seeds, expecting to uncover it to find rich compost-like soil ready to plant into.

What we uncovered was definitely dead grass and no weeds, but unfortunately the ground was very compacted and not very seedling friendly. In the ‘No Dig Organic Home and Garden’ book which we got last year for Christmas, it says that for preparing a space as a no-dig organic garden, it can actually be beneficial to dig once in order to allow the organic matter you’ll be adding to mix with the original soil.

So, together with our new friend and neighbour, we stood and watched José the tractor driver milling our land into fine, beautiful, aerated brown soil in a matter of minutes.

Wow, that would have taken a loong time by hand. Or b’hand as I like to say.

It cost 20 euros between us all and we’re going to plant potatoes in the far part of it some time this week. Then we will try to re-cover it with plastic (I say try, because we already did that then it flew off during the strong winds), and work bed by bed filling it up with seedlings from the greenhouse.

The soil now feels a lot deeper (we’re aware that a lot of that is due to aeration), but it will be more manageable for the reality of time we spend down there (not as much as we originally planned), and another local farmer is dropping manure off at the edge of the field which bit by bit we’re incorporating into the soil.

It’s March already! February always goes quickly of course but it feels like potato planting time has come around fast, we’ve still got loads left from last year’s harvest chitting away in a neighbour’s horreo. We were going to use the hay method again but to save money (it’s 3.50 a bale) we’ve decided to just plant them deeply into the freshly-ploughed soil and do one or two weeding sessions.

Potatoes grow pretty well on their own here due to the usually rainy climate. Although, it has been like summer for the last few weeks, 19 degree days, ensuing freckles and tans. We even tried to sow a few tomatoes just in case. They haven’t come up though. Nights are still cold and today we have had the first downpour in what feels like a very long time.

We had our 2nd seed meeting which was a success, Nik led the meeting in excellent Spanish and people shared their ideas for maintaining a semi-native seed bank before we got down to the swap itself. A dutch couple with new land came away with almost 20 wild cherry, apple and pear trees ready to plant. Signe gave us a whole bag full of strawberry plants and my back pocket was stuffed with medicinal seeds from Pedro, most of which I can’t pronounce and cleverly haven’t labelled. Will plant them in some compost and see what happens.

It was great to see people who wanted to get rid of their seeds due to moving giving them to people who are new here and ready to start a garden. People also met and formed connections between themselves, shared knowledge and tips and the children played whilst we talked. In this way the meeting isn’t just about seeds, but a place where people can get to know like minded people and share ideas.

Similarly, the permaculture group we started over a year ago now is still going strong! Raf & Birgit held the last one up on their part of the mountain and had us all building a fence around their land before making a big fire and eating spicy soup. I ended up teaching four of the kids how to use a drill which was honestly one of the most beautiful experiences of my life and made me truly appreciate the idea of a forest school. 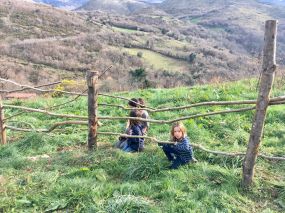 We can’t take all the credit for the beautiful fence, though. It was Raf & Birgit’s creative idea, other people dug the heavy posts in, and others coppiced large hazel trunks and brought them up for us to screw into the posts. We had the easy job!

Next week is Nik’s birthday, and we’re planning a multiple-day walk along a medieval route called the Camín Real de la Mesa. There are some fascinating thatched barns along the way which apparently you can stay in, as well as caves with paintings and breathtaking views of the mountains along the way. The route is supposed to be thousands of years old, pre-Romanic, but restored by the Romans millennia ago. 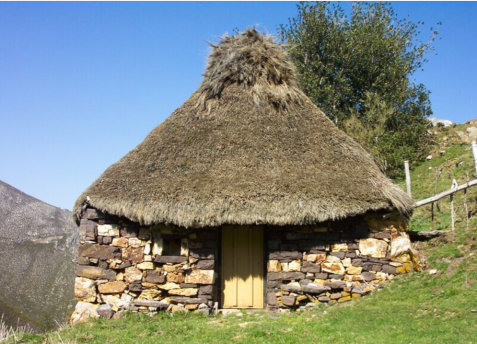 Before that we need to have the van MOTed (fun!) and hopefully will be making our first appearance at the Cabranes Tenderete, selling falafel, hummus and fillings.